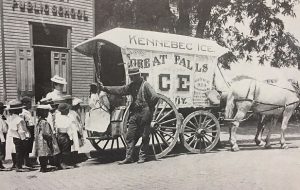 New York, Boston and Philadelphia saw their populations explode with immigrants driving up the demand for ice. During this time, nearly every family, grocer and barkeep in America had an ice box. In 1879 one company, Consolidated Ice had 3,000 horse-drawn ice wagons delivering to consumers in New York City.